In the previous post (also this) we established that without doubt, astronomical cycles — in particular, changes of obliquity (earth’s axial tilt) and precession (the relationship between the seasons and closest approach to the sun) — are related to the growth and decay of glacial ice. The question remains, why?

Incidentally, there is one astronomical cycle which does affect the total energy we receive from the sun, averaged over the whole year and over the whole globe: the cycle of eccentricity of the earth’s orbit. If the solar constant is

, and orbital eccentricity is

, then the annual average insolation over the entire globe is

For zero eccentricity, insolation is

But the eccentricity effect is small. Eccentricity varies between a minimum of near zero, and a maximum of slightly less than 0.06. If eccentricity is as high as 0.06 and the solar constant is 1360 W/m^2, then eccentricity enhancement inflates insolation from 340 W/m^2 to 340.61 W/m^2. But even that insolation increase of 0.61 W/m^2 is reduced by the albedo of the earth, to about 0.43 W/m^2 climate forcing. If climate sensitivity is 0.75 deg.C/(W/m^2), that would cause global warming of a mere 0.32 deg.C, not enough to trigger either glaciation or deglaciation.

Nonetheless, eccentricity has been proposed as the reason behind the roughly 100,000-year cycle of glaciations since the mid-Pleistocene transition (MPT, about 800,000 years ago) — it may be a driver of those cycles, or just a pacemaker. The idea has been around for quite a while, see e.g. Imbrie & Imbrie (1979, Ice Ages, Solving the Mystery, Harvard Univ. Press, Cambridge, MA).

But there are some difficulties with the attribution to eccentricity. For one thing, the physical mechanism for such an influence is unclear, the direct forcing of less than 0.4 W/m^2 (since eccentricity hasn’t been as high as 0.06 for at least five million years) isn’t enough to do the job. Also, eccentricity variations show an even stronger 400,000-year cycle which has not been detected in paleoclimate data (the “stage-11 problem”). And, there is uncomfortable mismatch between the phases of the glacial and eccentricity cycles, glacial cycles peaking before the peak in the eccentricity cycle (the “causality problem”).

Ridgwell et al. (1999, Paleoceanography, 14, 437-440) suggest that recent deglacial terminations may be principally due to precession, with nonlinear response leading to terminations every fourth or fifth cycle. Wunsch (2003, Climate Dynamics, 20, 353-363; and 2004, Quaternary Science Reviews, 23, 1001-1012) has suggested that the phenomenon is not a cycle at all, but a characteristic timescale due to stochastic behavior of the climate system. Meanwhile, Huybers & Wunsch (2005, Nature, 434, 491-494) have established rigorously a relationship between the timing of recent deglaciations and the obliquity cycle, but did not find a similar relationship for either the precession or eccentricity cycles.

Although obliquity and precession changes don’t influence global insolation, they can have a profound impact on local insolation. Precession causes major changes (up to 100 W/m^2) in the amount of insolation at various times of year, depending on the latitude of the observer. It doesn’t change the annual average for any location, but it strongly impacts the winter/summer contrast. Hotter summers lead to more ice melt, colder winters lead to less snowfall, both of which tend to waste ice sheets. It’s worth noting that precession influences the two hemispheres oppositely: when we’re closest to the sun in northern hemisphere summer, it’s southern hemisphere winter, leading to more extreme northern seasons but less extreme southern seasons.

The most prominent theory about how astronomical cycles affect the growth and decay of ice sheets is through insolation at high northern latitude around midsummer (usually taken to be June 21st at 65N latitude). There’s considerable observational evidence of a powerful impact of summer heating on ice sheet mass balance from more than a century of glaciological field studies (summarized in Denton et al. 2005, Quaternary Science Reviews, 24, 1159). Yet midsummer (or most times of year) insolation at high latitudes (in fact at most latitudes) is dominated by the precession rather than obliquity cycle, while obliquity dominates global ice volume changes.

This leads to another major puzzle: why are cycles in global ice volume dominated by the 41,000-year obliquity cycle (especially prior to the MPT) with very little influence of the precession cycle, when midsummer insolation is dominated by precession with far less influence of obliquity?

I’d like to mention two prominent ideas about these questions. One is that of Huybers, that the driver for glacial changes isn’t midsummer insolation, but “summer heat,” defined as the integrated insolation during the time of year that insolation exceeds a critical threshold value. For many choices of threshold value, this is more influenced by obliquity than precession. In fact for the right threshold value, it much more closely mimics annual average insolation, which isn’t affected by precession at all.

This might explain more than just the dominance of obliquity over precession in global ice volume, it may also explain (in part) the change in the character of glacial variations since the MPT. Annual average insolation varies strongly with the obliquity cycle at high latitudes (with increased obliquity increasing insolation), and near the equator (where increased obliquity decreases insolation). Here’s the latitude-dependent change in annual average insolation for an obliquity increase from 22 deg. to 24.5 deg. (about its range of variation over the last five million years): 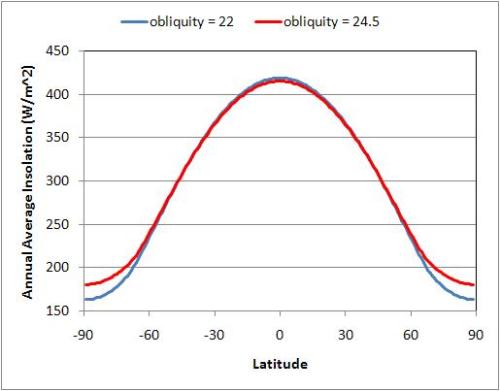 At about latitude 44N, the change in annual average insolation due to obliquity is zero. For a range of threshold values, the variations in “summer heat” show a similar decline as one gets farther from the pole.

Because of the gradual overall cooling over the last five million years, during recent (since the MPT) glaciations the northern hemisphere ice sheets have been much more extensive than before. Most ice ablation occurs near the edge of the ice sheet; since the larger ice sheets post-MPT extend so much further south, they suffer far less increased insolation due to obliquity (or summer heat), which significantly mutes its influence. Thus the strict obliquity control pre-MPT has given way to more influence of other factors, including precession.

Another fascinating idea is related to the fact that, while obliquity affects both hemispheres synchronously, precession affects the hemispheres oppositely. This motivated Raymo et al. (2006, Science, 313, 492-495) to suggest that precession does affect glacial cycles significantly, but prior to the MPT it affected the two hemispheres oppositely so to a large degree they cancel each other out in influencing global ice mass — the gains or losses of one hemisphere offset the losses or gains of the other.

For the southern hemisphere (in particular, Antarctica) to respond strongly enough to counteract a significant part of northern-hemisphere changes, requires greater fluctuation in Antarctic ice. Raymo et al. suggest that prior to the MPT, the East Antarctic ice sheet didn’t always extend all the way to the coast, so the “ablation zone” was land-based rather than ocean-based. This allows for much more variation in Antarctic ice in response to insolation, which allows for strong precession influence on ice sheets but with opposite signs in opposing hemispheres, so global ice volume shows far less precession influence.

Since the MPT, they suggest, the ablation zone of the East Antarctic ice sheet has been ocean-based rather than land-based. Therefore it’s less affected by insolation changes, and far more affected by sea level changes — rising sea levels can “unpin” the ice and contribute to its decline, while falling sea levels extend the land area and the ice sheets expand to reach the (more distant) sea. Hence the northern hemisphere fluctuations, by altering sea level, are a primary driver of southern glacial ice, so the two hemispheres response to precessional changes in synch rather than out of.

I’ll close with one final idea. When obliquity increases, and the poles tilt more toward the sun, more of the incoming sunlight strikes polar regions, which is where we find most of earth’s ice and snow. Ice and snow are highly reflective, so increasing the insolation in polar regions increases earth’s albedo (net reflectivity of incoming solar radiation). This decreases climate forcing even when insolation is unchanged, in fact increased obliquity reduces climate forcing. I’ve calculated, using seasonal and geographical albedo data from ERBE (Barkstrom et al. 1990, EOS Transactions, American Geophysical Union, 71, February 27) that an increase in obliquity from 22 to 24.5 degrees changes albedo enough to change climate forcing by about -0.83 W/m^2. Of course, this is under present albedo conditions, it doesn’t account for changes in the cryosphere which lead to albedo feedback.

That’s not a lot — it’s less change than present greenhouse-gas forcing — but it’s not zero either.