This is just a “quickie” to show the results of Fourier analysis of a stack of delta-oxygen-18 records from benthic (i.e., ocean floor) sediment cores, which is not orbitally tuned.


The data are from the supplemental online material to Huybers 2006, Early Pleistocene Glacial Cycles and the Integrated Summer Insolation Forcing, Science, 313, 508, doi:10.1126/science.1125249. They cover about the last two million years:

The 41,000-year obliquity period is clearly present. The frequencies associated with precession are possibly present, which is why I’ve indicated them with a question mark after “Precession”.

We can make the precession influence clearer by recognizing that its impact is stronger in the most recent million years than it was previously. In fact the Fourier spectrum of the first (older) million years of this data set doesn’t really show the precession band at all (while showing the obliquity cycle much more prominently): 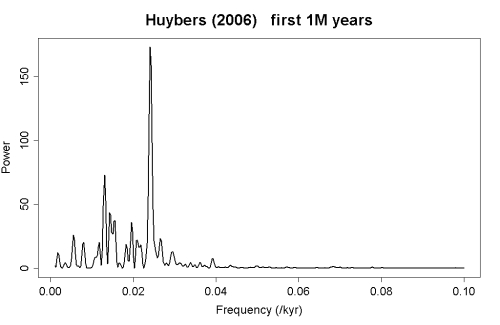 The second (most recent) million years, however, does show the precession frequency band:

especially if we zoom in:

The response in this frequency range for the sediment core data is more “broadband” than that of the precession signal itself, as well as more so than we noted in the (orbitally tuned) LR04 stack. This is to be expected, if the age model fails to capture the timing of fluctuations perfectly. That will “smear out” the power in the precession band, while orbital tuning will re-focus it. This argues not only for the validity, but for the usefulness, of the orbital tuning.

NOTE: the age model for these data, older than about 1 million years is influenced in a very small way by orbital assumptions, but I think we’re on safe ground, since the precession cycle is really only present in the most recent million years, and the obliquity cycle is so strong and persistent as to be beyond all doubt. Huybers describes it thus:

A Pleistocene age-model is estimated by extending the depth-derived age-model of (S1) from 0.8 myr to 2.4 myr ago. Geomagnetic age-control comes from the Brunhes-Matuyama transition (0.78 myr), the Olduvai (1.95-1.77 myr) and Jaramillo (10.7-9.9 myr) subchrons, and the Matuyama-Gauss transition (2.58 myr). These geomagnetic ages are derived from a combination of radiometric dating techniques, sea-floor spreading rates, and for ages older than the Brunhes-Matuyama, astronomically derived age estimates (S2,S3). Thus, geomagnetic ages older than the Brunhes-Matuyama magnetic reversal (0.78 myr) do contain limited orbital assumptions, but constitute only five ages in the course of 2 myr of which orbital assumptions are but one constraint. Geomagnetic events are assumed to occur in the same isotopic stages identified by (S4) for core DSDP607.

5 responses to “Glacial Cycles, part 1b”