Climate Central has an interesting post about the extreme heat wave in Moscow this last July. They point out that if we assume the data are normally distributed, then the July 2010 average temperature anomaly value was more than 4 standard deviations above the July mean (and they have a lovely graph to emphasize it): 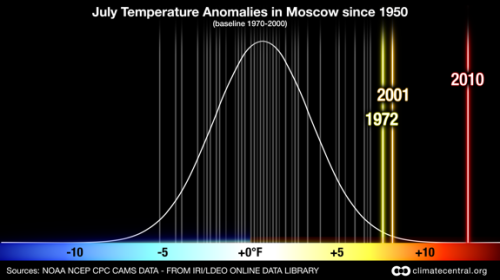 END_OF_DOCUMENT_TOKEN_TO_BE_REPLACED

I had a good question the other day:

Now, my question is, if you know the answer: How high is the probability that arctic change is caused by AGW versus that is just natural variation of some kind (confidence level) ?

Good question. I’m not aware of any “official” estimate of the probability, but here’s mine.

First I’ll note that if AGW (anthroppogenic global warming) is basically sound science, then it’s overwhelmingly likely to be the cause of arctic change. Although it’s possible that AGW is sound science but something else has caused recent arctic change, I consider that to be so unlikely that the chance is negligible.

So we’re really trying to decide between two hypotheses. Hypothesis “A” is that AGW is basically sound science, so human activity is altering our climate, pushing it toward significant warming. Hypothesis “B” is that AGW is not basically sound science, that human activity has negligible impact on climate, and any notable changes we’ve observed recently are brought about by natural variation.

The observation “X” will be: arctic changes over the last several decades, namely warming much faster than the globe as a whole, and sea ice showing rapid and unprecedented decline. How likely were such changes (what’s the probability of “X”) if hypothesis “A” is true (AGW is sound), compared to when hypothesis “B” is true (AGW is not)?

Concensus AGW science predicts “X” as a consequence of “A.” But that doesn’t mean it has to happen — it’s still possible that AGW is sound but there something quirky about the Arctic that they missed, or that the changes will happen more slowly than expected, so it won’t warm faster than the globe and/or sea ice won’t decline. Nonetheless, if AGW is sound then the recent Arctic changes were pretty damn likely (seein’ as how they were predicted).

But no known mechanism of natural variation can explain “X”, a drastic change unlike anything in at least a century and probably thousands of years.

So if AGW is sound, then the changes we’ve observed are very likely, if it isn’t then they’re extremely unlikely.

How likely? My estimate: if AGW is sound science there’s at least a 90% chance of such changes as we’ve seen in the Arctic. So the first probability we seek, the probability of seeing “X” if “A” is true, is 90%

How unlikely? With no AGW, a change such as hasn’t been seen for thousands of years, for which there’s no known cause, in fact the known sources of natural variation can be ruled out so there must be some entirely natural but unknown cause, is pretty damn unlikely. I don’t believe it’s sane to maintain that there’s more than 5% chance of the recent Arctic changes naturally. In fact I think that’s an overly generous estimate, but let’s say the probability of seeing “X” if “B” is true, is 5%

With these conditional probabilities we can make a Bayesian estimate of the probability that AGW is correct.

A Bayesian estimate requires a “prior probability,” i.e., a probability that AGW is correct prior to knowing about the Arctic changes. We’ll call it

. Then the probability that AGW is not correct (prior to knowledge of Arctic changes) will be

The Bayesian estimate of the probabilty that theory

is true, given the new information (Arctic changes, i.e.,

happened), is given by Bayes theorem:

If we substitute our estimated values, we get

Now we need to estimate the “prior probability,” i.e. the probability that AGW is sound science, without taking into account Arctic changes. In my opinion, the laws of physics all by themselves make AGW more likely than not — by a fair abount. Let’s be conservative and go with a 60/40 split, so we’ll say the prior probability is

. Then the Bayesian posterior probability becomes

Like I said: arctic change is very strong evidence of AGW. So strong, in fact, that it increases a naive 60% probability estimate to 96.4%.

That’s a pretty crude calculation. It’s also not a bad estimate of my belief regarding the question: is AGW sound science or not? Yes 99.7% — being conservative. And yes it’s the cause of recent Arctic change.