Blowin’ in the Wind

Anthony Watts posted about how Steve Goddard’s prediction for the summer minimum in sea ice extent was pretty good.

This graph from the SEARCH report (in entirety below) sums it up pretty well:

and shows this graph: 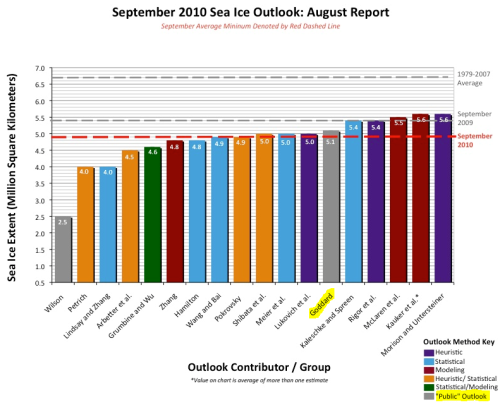 Sure enough, it clearly shows Goddard’s forecast as 5.1 million km^2. But I have to wonder, when exactly did Goddard make that forecast?

Back in June, Steve Goddard was convinced that sea ice has thickened lately, and that we were bound for a “nice recovery” this summer. He even predicted on June 2nd:

Conclusion : Should we expect a nice recovery this summer due to the thicker ice? You bet ya. Even if all the ice less than 2.5 metres thick melted this summer, we would still see a record high minimum in the DMI charts.

He doesn’t quote a number, but he does claim a record high minimum in the DMI charts. A day later he added this:

Anyone betting on the minimum extent needs to recognize that summer weather can dramatically effect the behaviour of the ice. The fact that the ice is thicker now is no guarantee that it won’t shrink substantially if the summer turns out to be very warm, windy or sunny. Joe Bastardi believes that it will be a warm summer in the Arctic. I’m not a weather forecaster and won’t make any weather predictions.

On June 6th Goddard got a little more specific:

Conclusion : Based on current ice thickness, we should expect September extent/area to come in near the top of the JAXA rankings (near 2003 and 2006.) However, unusual weather conditions like those from the summer of 2007 could dramatically change this. There is no guarantee, because weather is very variable.

At least by June 23rd he had finally gotten specific:

On July 20th he reinforced his claim:

I expect to see that JAXA will move closer to my 5.5 million km² forecast for the summer minimum.

He confirmed it again on Aug. 1st:

Our PIPS based forecast of 5.5 million km² continues to be right on track.

By Aug. 8th he suggested that his 5.5 million km^2 prediction might even be too conservative(!) and that this summer’s minimum might be the highest since 2006, maybe even exceed 2005:

Conclusion : There will probably be minimal ice loss during August. The minimum is likely to be the highest since 2006, and possibly higher than 2005. So far, my forecast of 5.5 million km² is looking very conservative. Ice extent is higher than I predicted for early August.

As late as Aug. 15th he was still suggesting that 5.5 million might be too conservative.

My forecast (dashed line below) minimum of 5.5 million (JAXA) continues to look conservative. It all comes down to what the winds do over the next few weeks. If the winds keep compressing the ice, the minimum may go a little below 5.5. If the winds quiesce, the minimum may come in a little above 5.5 – which is looking like a pretty good number right now. Some people at NSIDC started out with a 5.5 forecast this year, but seem to have backed away from it since.

The JAXA extent crossed below the 5.5 million km^2 mark on Aug. 26th, with 5 days remaining before September even started. With only 3 days left in the month, the JAXA extent as of August 28th was only 5.34 million km^2 — already below his predicted 5.5 and it wasn’t even September yet — but in spite of that Goddard on Aug. 29th didn’t back down from his forecast made in June:

It continues to look like my June forecast will be close to correct, though as we have seen – this contest is a crap shoot. It all depends on the wind.

The record is clear. After Goddard settled on a figure in mid-June, he stuck to it like glue … insisting that his June forecast would be close to correct as late as Aug. 29th. So when exactly did he make that forecast of 5.1?

75 responses to “Blowin’ in the Wind”