Nobody in his right mind disputes that since satellite observations began, the extent of sea ice in the arctic has declined dramatically; this year the summer minimum extent was the 3rd-lowest on record. There is also considerable observational evidence that arctic sea ice extent over the last few decades is much lower than it has been for at least a century prior to modern times.

A team of researchers, led by Leonid Polyak of Ohio State University’s Byrd Polar Research Center, has culled the available evidence from hundreds of studies of proxy data for sea ice extent. As reported at Science Daily, in a new paper in Quaternary Science Reviews they report their findings: that the present extent of sea ice in the arctic is at its lowest for at least several thousand years.


But we’ll address the very long-term arctic ice extent in another post. In this one, let’s look at the evidence about arctic (and antarctic) sea ice over the last century or so.

Satellite observations are not the only source of information about past sea ice. There is in fact a wealth of information, especially for the latter half of the 20th century, although the available data are extremely inhomogeneous. There’s quite a bit of information in historical charts based on in situ observations, and data from aerial reconnaissance. I’m aware of two most prominent reconstructions of arctic sea ice for the 20th century based on these data. One is the HADISST sea ice and sea surface temperature data set from the Hadley Centre (which also covers the southern hemisphere), the other is from Kinnard et al. (2008).

The HADISST data set is described in Rayner et al. 2003 (J. Geophys. Res., 108, 4407), parts of which I’ll summarize (often quoting at length). For the Northern Hemisphere, data include sea ice concentration for 1901 to 1995 assembled from hand-drawn charts, sometimes limited to ice extent, in other cases indicating concentration. These were collated by Walsh and others to give reasonably uniform estimates of sea ice extent at all longitudes. Other compilations are used to fill in areas not covered by the Walsh compilation, in particular the Great Lakes.

For the Southern Hemisphere data are more sparse but not entirely absent. In fact prior to 1973, the HADISST ice data are based primarily on climatology, i.e., on estimates of annual averages so they reflect persistent conditions but don’t include interannual variability. Climatologies for 1929-1939 were taken from Deutsches Hydrographisches Institute, and for 1947 to 1962 from Tolstikov, who summarized information from Russian expeditions. These sources indicate considerably greater southern ice extent than at present, a conclusion which is supported by other studies (de la Mare 1997, Nature, 389, 57; Jones 1990, J. Clim., 3, 1193).

For both hemispheres, quasi-weekly sea ice concentration and extent were digitized by the U.S. National Climatic Data Center (NCDC) from hand-drawn U.S. National Ice Center (NIC) analyses. These were based on U.S. Navy, Canadian and Danish aerial reconnaissance data and from retrievals from advanced very high resolution radiometer (AVHRR), passive microwave, and other satellite instruments

One of the difficulties using charts based on in situ observations is that there was very little exploration poleward of the “marginal ice zone” (the area of partial sea ice cover near the ice edge), so in older reconstructions the ice concentration was often assumed to be 100% beyond the marginal zone. By comparing in situ, aerial, and satellite observations, it’s possible to make a much better estimate of actual ice conditions throughout the polar regions.

I haven’t located the data from Kinnard et al. (perhaps someone knows a link?), but their data are graphed in Polyak et al. (2010). It shows the progression of both the summer minimum extent, and the winter maximum extent, since 1870:

I have downloaded the HADISST ice data and computed sea ice extent for both the arctic and antarctic (based on 15% concentration to be consistent with NSIDC data from the satellite era). I combined these with NSIDC satellite data since 1979 to form a continuous time series from 1870 to the present. Some of these episodes are based on climatology (i.e., averages over decadal timescales) as previously mentioned, so they don’t allow the study of interannual variability but do give strong evidence of prevailing conditions in the longer term; this is especially true of the southern hemisphere. They provide estimates of sea ice extent for the last 140 years. 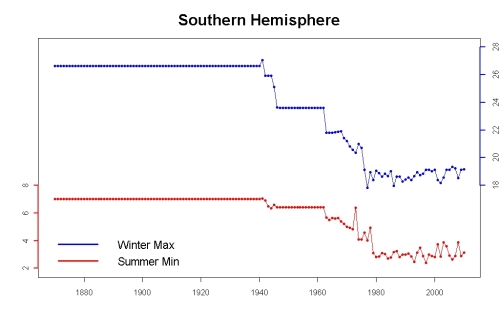 Most of the ice reduction in the Northern Hemisphere has occurred since 1970, and the decline continues at a rapid pace. Also, the summer minimum has declined faster than the winter maximum, which is at least in part due to simple geography, i.e., the placement of land masses means that the same northward migration of ice latitude in winter as in summer corresponds to a greater reduction in area and extent during summer.

Things are different for the Southern Hemisphere. Most of the reduction has occurred since 1940, and especially since 1960, and the reduction during winter has been greater than during summer.

Despite their obvious imperfections, these are estimates based on exhaustive study of actual data — not just cherry-picked anecdotes to support some preconception or ideology. The data are clear: sea ice extent declined dramatically during the 20th century in both hemispheres. The arctic sea ice decline has accelerated to the point that it can truly be described as “alarming.” And, those who claim that in the mid-20th century the arctic was “practically ice-free” are contradicted by the data.

87 responses to “History of Arctic (and Antarctic) Sea Ice, Part 1”