In my last post I made two predictions. The second one was this:

Second: Either Anthony Watts won’t answer my question about why he’s so fond of less than 6 years’ data when we have over 30 (and that’s just from satellites) — or he’ll attack me personally, calling me a coward for blogging under a pseudonym. After all, the best predictor of future behavior is past behavior.

The question was this:

We have over 30 years of satellite data for arctic sea ice. Why do you consistently display the only data source I know of that covers less than 6 years?

Anthony has replied. But just as I predicted, he didn’t answer my question. Instead he told a lie.


He pretended that he doesn’t consistently display the only data source that covers less than 6 years. He points to his Sea Ice Page, which shows numerous graphs from numerous sources of sea ice data. Then he asks:

Anthony, you do have a sea ice page that shows a lot of graphs and has a lot of links. But what do you show in your posts? Let’s survey your last 5 posts on arctic sea ice:

Let’s be crystal clear: the subject is global warming. For that subject, the relevant fact about arctic sea ice is the trend — especially the trend in the summer minimum. But Anthony Watts consistently avoids the trend, puts the focus on a single day’s statistical noise, and yes, he omits data prior to 2002 — sometimes omits anything prior to 2005, because those data put the lie to his claims of “recovery” which is generally based on no other reason than fall is colder than summer, and winter is colder than fall.

Consistently. And when he’s called out, he lies about it.

Watts has been trying so hard to convince us that arctic sea ice isn’t in a death spiral. The fact that he has a sea ice page with links to longer data sets, doesn’t alter tha fact that his focus is obvious: emphasize short-term noise to distract attention away from the long-term trend. And the reason he’s so intent on distracting people from the trend, is that the trend looks like this: 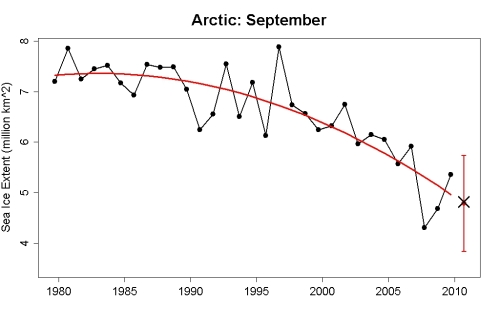 Perhaps the strongest proof of Watts’ real blindness comes from his own pen; he makes the astounding blunder of asking:

Why would you not want to cheer (he objects to this post Go Ice Go!) the refreezing of Arctic Sea Ice?

I’ll do my readers the courtesy which you refuse to do yours: I’ll actually answer the question.

Sea ice refreezes every fall. It’s because of something called “seasons.” Only a fool would “cheer” fall being colder than winter; perhaps that explains why you chose to do so.

Anthony, you didn’t answer the question at all. Just as we expected.