When it comes to sea ice, especially in the arctic, the stooges have been very busy.

It wasn’t very long ago Shemp and Moe told us that Arctic sea ice was “about to hit normal.” Curly got in on the act too. Meanwhile Shemp desperately clings to the belief that the disappearance of arctic sea ice is “more of a marketing event than a climatological event,” and seems to think he can estimate sea ice volume better than the pros. I’m skeptical.


The pros say this: 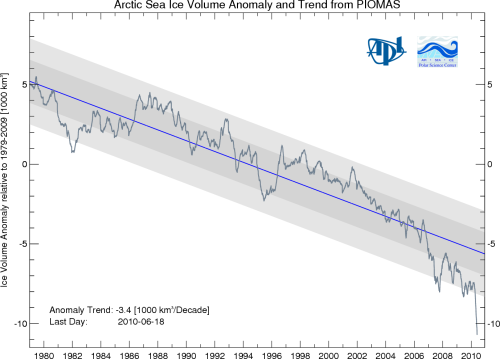 I suspect they got it right.

The PIOMAS website, in addition to providing this lovely graph, also gives access to some interesting data sets, including sea ice draft as measured by submarines. Draft is the thickness of the ice below the water, which is about 93% of the total ice thickness. These particular data only go up to the year 2000, but they still tell an interesting story about arctic sea ice. They were used in
Rothrock et al. 2008 (The decline in arctic sea-ice thickness: separating the spatial, annual, and interannual variability in a quarter century of submarine data, J. Geophys. Res., 2008, VOL. 113, C05003, doi:10.1029/2007JC004252) to study how arctic sea ice has varied over both geographic location and over time.

Each data record is the average sea ice draft over a short track (“short” meaning usually about 50 km.) as measured by submarine cruises. The geographical locations of the data values are here (the north pole is at the center of the concentric circles, the prime meridian points toward the right, the concentric circles are 5 degrees latitude apart): 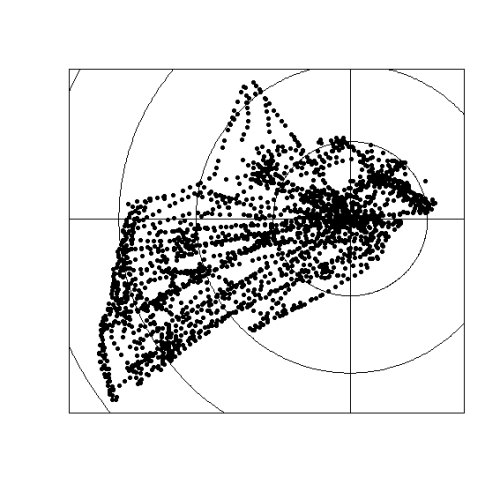 I studied the data prior to reading Rothrock et al.’s analysis, and my first instinct was to model the ice thickness as a function of time, and of distance from the pole. I modeled the time dependence as a cubic polynomial, the polar-distance dependence as a quartic polynomial, and computed a periodogram allowing for those influences in order to determine the nature of the annual cycle. Although I knew this was only a rough analysis I expected to get a reasonable approximation, and it indicated that ice tended to be thicker at the pole than far from it, that over the time period covered by the data average ice draft had decreased by about 1 meter, and that the annual cycle had an amplitude of about 1 meter as well but showed no sign of higher harmonics in a Fourier analysis.

Rothrock et al. did a similar analysis. To model the spatial variation, they defined an x-y grid for the geographic area and used a 5th-degree (quintic) polynomial in x and y. For the time dependence they used a cubic polynomial and a 1st-order Fourier series for the annual cycle. They concluded that the annual cycle had an amplitude of about 1.06 m, and the average thickness declined from 1980 to 2000 by about 1.13 m. Of course this is ice draft, so the thickness is a bit larger — the annual cycle in thickness is about 1.12 m and the trend decline from 1980 to 2000 about 1.25 m.

I reproduced their results, with an interesting thought in mind. The model enables us to model the spatial and temporal variations separately, and even allows us to separate the time trend from the seasonal pattern. So I took the model for the spatial variation + seasonal pattern only, subtracted that from the data, to generate residuals which would still contain the time trend. This enabled me to compare those residuals to the time-trend part of the Rothrock model. Not only would this test the match between the actual time-trend variations (without the confounding influence of spatial variations or seasonal changes) and the model, it might reveal departures of the actual time-trend pattern from the modeled pattern.

Here’s the result, i.e., the data with the spatial and seasonal patterns removed. I’ve also superimposed 1-year averages (in blue) and the cubic time-trend model (in red): 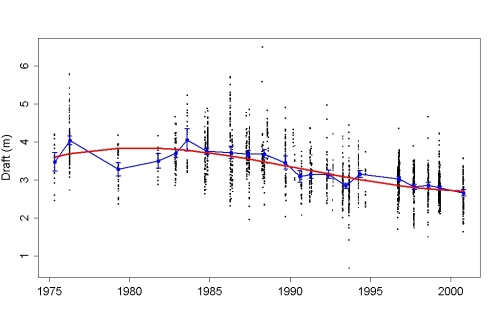 Just for a clearer view, here’s a close-up on the 1-year averages and cubic model: 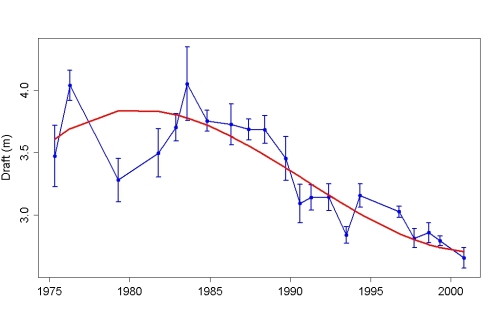 These values should reflect the ice thickness at position x = y = 0 (the pole), at their average values throughout the year, so the remaining variation should be mainly the time trend. As you can see, the cubic polynomial model (red line) gives a reasonable approximation to these variations but doesn’t tell the whole story. For one thing, there’s more variation during the 1975-1985 period than the model indicates. For another thing, the model is “leveling off” in 2000 but the data aren’t — sea ice thickness is still declining.

Another way to eliminate much of the spatial variation is to look at only the data very near the pole. Here’s the result of removing the seasonal pattern from the data at locations north of latitude 85 deg.N: 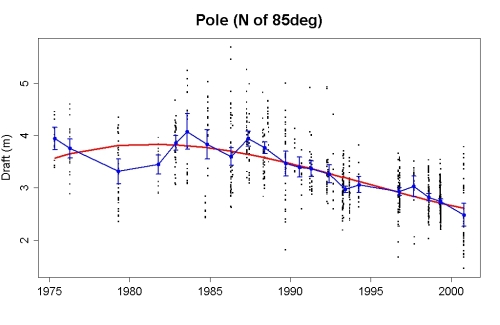 Here is a close-up on the 1-year averages and the cubic trend model: 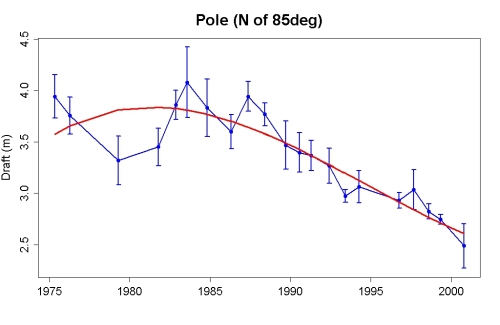 Essentially we have the same behavior. Ice draft (and therefore thickness) has declined quite a bit, there’s more variation in the 1975-1985 period than the cubic trend model indicates, and the model indicates a leveling off about 2000 but the data don’t, sea ice thickness is still declining apace.

I can almost hear the stooges claiming that those data only go to 2000, and sea ice has probably thickened since then. Lamentably, there’s very little submarine draft measurement data available after 2000. But there is laser altimetry data from IceSat which enables study of arctic sea ice thickness during more recent years. That’s the basis of Kwok and Rothrock 2009, Decline in Arctic sea ice thickness from submarine and ICESat records: 1958–2008, GRL, VOL. 36, L15501, doi:10.1029/2009GL039035. They conclude that arctic sea ice thickness has continued to decline this past decade.

If you combine all the available information about ice thickness and ice area, you could even come up with an estimate of arctic sea ice volume. That’s exactly what the folks at the University of Washington’s Polar Science Center have done; their results are shown in the first graph of this post.