Someone recently pointed to a post by Norman G. Purves at “Climategate Country Club” about sea level rise.


Purves compares statements from the Univ. of Colorado at Boulder sea level change website to his own “analysis” of the “data.” He concludes:

… the difference between a straightforward line-fit to these data, and the results of the UColo group, strongly suggests that Climate Researchers have done some fishy things with this data.

Finally, these results should stand as positive proof that anthropogenic global warming is having no measureable effect on sea-level. At least in regard to sea-level, the current assertions of the “Climate Change Researchers” are without any scientific foundation.

He begins by showing this graph from the U. of Colo website: 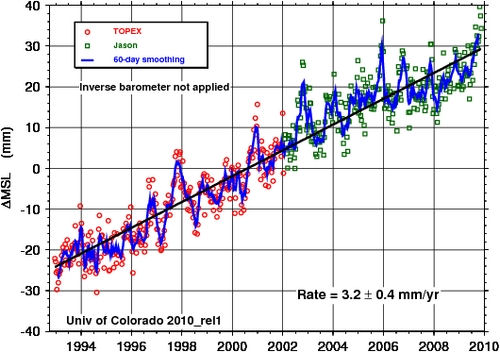 There were some things about this chart that bothered me; first, the “60-day smoothing” of this data suggests a cyclic trend in the sea-level measurements that is simply not evident in the actual data; second, the line-fit to these data simply didn’t look right to me.

Then with a hearty “So, I obtained the actual data from TOPEX/Jason and did my own analysis,” he shows us his own graph:

What he fails to mention is that his graph isn’t of the same data.

Even accounting for using different data, Purves still can’t get the analysis right. He says “the “60-day smoothing” of this data suggests a cyclic trend in the sea-level measurements that is simply not evident in the actual data,” and “Note that any periodic variation in sea-level (such as suggested by the “60-day smoothing” done by UColo) is not at all evident in the data,” and “The tolerance of the spacecraft’s orbital position renders UColo’s “60-day smoothing” absurd. There simply is no cyle to be measured here. The blue curve in UColo’s graph is, therefore, complete nonsense.”

Let’s take the data he uses, subtract a linear trend, and do a Fourier spectrum of the residuals to look for periodic variation. Here ’tis:

Well well! There’s quite a peak in the periodogram, at period P=1 year. That’s periodic variation. We can even do a close-up of the frequency range from 0 to 4 cycles/yr: 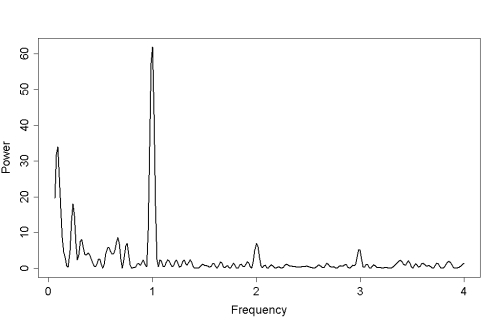 Not only do we see the undeniable peak at period 1 yr, we also see two higher harmonics of that period. There’s no doubt about it: these data (yes, the data shown by Purves) show a periodic variation. How could he have missed that? Maybe … when it comes to time series analysis, he doesn’t know what he’s doing.

As for the 60-day smoothing applied by U.Colo., that turns out to be an especially good choice. Look at the periodogram from frequencies 4 to 8 cycyles/yr:

There’s a clear peak at frequency 6.197 cycle/yr, corresponding to period P=0.1614 year. That’s 58.94 days, which is suggestively close to twice the lunar month. So, there appears to be another periodic variation in the data, which may be related to the lunar month (and to the tidal cycle). By smoothing on a 60-day time scale the U.Colo. smooth actually removes that cyclic variation, which emphasizes the long-term trend over the short-term cycle.

In fact for the best picture of the long-term trend, you’d want to remove the 1-year periodic variation as well. I guess that’s why U.Colo. also supplies data with the seasonal cycle removed, to further emphasize the long-term trend over the short-term cycle.

Purves makes other, rather silly mistakes. For instance the comment about how “The tolerance of the spacecraft’s orbital position renders UColo’s “60-day smoothing” absurd,” is itself absurd. The spacecraft tolerance has nothing whatever to do with the appropriateness of a 60-day smooth.

But, pointing out all of Purves’s absurdities is hardly necessary. After all, not only did he not get the analysis right, he didn’t even show the right data. Besides, it would take too long.

30 responses to “Sea Level Rise: What the Data Actually Shows”